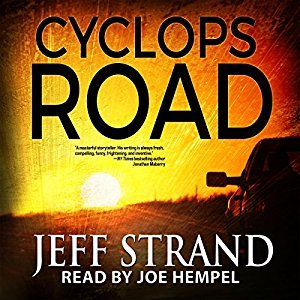 A unique and crazy story

Cyclops Road tells the story of Harriett and her journey to slay a cyclops that is tormenting a town.  Along the way, she meets up with Evan who is in a bad place.  His wife was sick and passed away recently, and he lost a job in a really sad and not-epic way at all.  Evan and Harriett soon join forces on the weirdest road trip ever looking for other “heroes” along the way to a small town in the southwest to slay a cyclops.

It’s not often that I read a book that I have a hard time putting how I felt during it into words.  Cyclops Road might be one of those books.  Honestly, through the entire journey, I felt like Evan as he drove the others to their “destiny”.  I was along for the ride and totally interesting in figuring out how the story was going to end.

Cyclops Road is most likely considered a fantasy book which isn’t a genre that I usually read or listen to, but I enjoyed the heck out of this book.  Jeff Strand was able to tell a story that felt both ridiculous and awesome.  Strand’s ability to build a character that is intriguing without making me lose interest in her too is pretty rare.  Usually, I need some more detail to get behind a character in what she hopes, dreams, and stands for.  But with Harriett, I was just so intrigued by her (much like Evan) that I had to figure out what was going on.

My wife asked me about it and I explained it to her.  She gave me the same look I had when I started the book.  I want to make her read it just to see how she feels about it in the end.  I was completely enamored with the book by the time I finished it.

Each character that Evan and Harriett approached or came across were totally different from each other which made their dynamic within the group change with every different person. This made the book transform and change numerous times but still remain the same (I know that doesn’t make much sense).

Overall, Cyclops Road will be one of those stories that I won’t forget.  It was a truly unique piece of fiction that felt part Stephen King and part what the heck.  Add in the narration by Joe Hempel and you easily have one of my favorite books of 2017 so far.

Evan Portin is at a sad, scary place in his life. While taking a long walk to compose himself and figure out where to go from here, he encounters a young woman being mugged in a park.

When he tries to intervene, he discovers that she doesn't need his help. At all.

Her name is Harriett. She is very, very good at defending herself. Everything she owns is in a large backpack. She's never seen a cell phone. She's never been in a car. She's never really ventured into the outside world.

And she says she's traveling across the country to slay a Cyclops.

She's crazy, right? Evan is not in the habit of hanging out with delusional women he's just met. On the other hand, it can't hurt to offer her a ride out of town. And maybe this insane journey is exactly what he needs... 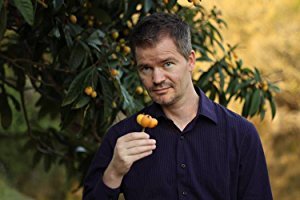 Jeff Strand is a four-time nominee (and zero-time winner) of the Bram Stoker Award.

His novels are usually classified as horror, but they’re really all over the place, from comedies to thrillers to drama to, yes, even a fairy tale.

His book STALKING YOU NOW is being made into the feature film MINDY HAS TO DIE.

Because he doesn’t do cold weather anymore, he lives in Tampa, Florida with his wife and cat.