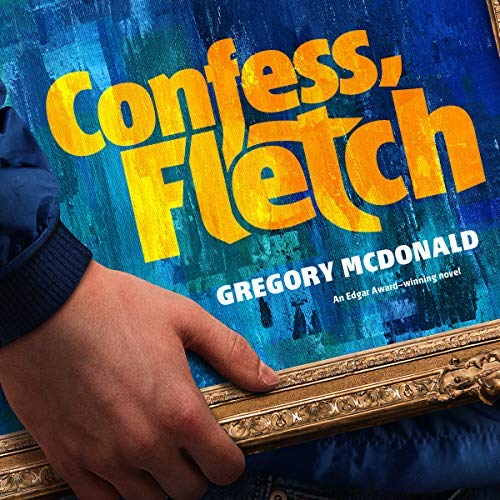 There is just something about these books that make them so damn enjoyable. From Fletch’s carefree manner in which he deals with everything to the crazy cast of characters around him.  It’s enjoyable from beginning to end.

Confess, Fletch finds I.M. Fletch in quite a pickle when he finds a naked dead girl in the Boston apartment he’s swapped with an American who is taking a villa from him for a few weeks. He calls the police and what follows is one of my favorite new characters (Flynn) and easily some of the best banter in these books to date.

Throw in the actual thing that Fletch is in Boston for and you have a wonderfully written book that could hold its own 40 years after it was written without feeling out of place.  There were some things that would have been easier and a few things that some younger adults might not understand (literally calling the operator, looking stuff up in the newspaper and even more specifically the newspaper’s information store, among a few other things).

I can tell that there are going to be more books (I think I’ve seen at least 9 are written) but I can’t tell where on Earth McDonald will take him in the next story.  I guess I’ll have to listen and find out.

Dan John Miller is able to do a bunch of different voices for the different cases but I kept cracking up at the Countess DeGrassi’s voice. For some reason, it would crack me up (I believe it was supposed to be South American of sorts) it sounded like a combination of a few different accents I’ve heard in comedy and growing up around some Polish immigrants.  The various “how do you say?” throw in made it (I understand it was the writing but Miller nailed the execution of it). Also, Miller’s accent for the detective was perfect.  It was described as light and like he used his voice like a song and that was exactly how it was played. An absolutely killer performance.

Kudos for Blackstone for bringing these books back to life. I probably wouldn’t have given them a second glance but they rebranded them with a similarly branded cover for each book and had them all narrated again.  I’m glad that they took their time with these because they’re a blast and I’ll be continuing them as my little “break” books.

Offering up brisk, tightly written plots and a stellar cast of characters both new and old, Confess, Fletch finds our incorrigible protagonist back in deep waters once again.

Fletch, now newly engaged and happily living out his days in Italy, finds himself embroiled in yet another scandal. His soon-to-be father-in-law has been kidnapped and is now presumed dead, and the priceless collection of rare art that belongs to his fiancée’s family has been stolen.

Ever the investigative reporter, he receives a tip about the missing art that lands him in Boston, where he walks right into a murder scene in his apartment. What clearly looks like a setup to the unfazed Fletch looks quite different to the detective assigned to the case, Mr. Francis Xavier Flynn. But even if the case is seemingly cut-and-dry, Flynn is reluctant to arrest the only suspect that stands before him.

Now under the detective’s watchful eye, Fletch must try to clear his name and search for the missing paintings, all while his gorgeous future mother-in-law works to persuade him for help the best way she knows how—seduction.

How to American: An Immigrant’s Gu

Fletch by Gregory McDonald (Narrated by