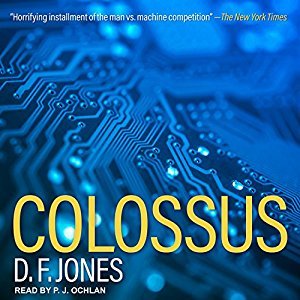 A wonderfully thought out story

The (newer) cover on this book really caught my eye.  I picked this up on Kindle when it was 99 cents a while back not realizing that it was an older technothriller.  When I saw that Tantor Audio was going to bring this to life on audio, I had to listen to it.

Throughout my reading of this book, I kept thinking to myself “was this really written in the 60’s?” There were so many pieces that made this feel like it could have been written in the 80’s or early 90’s.  It reminded me of Crichton in that way.  He was able to write about things that just became normal technology way before they were popular.  Sure the “teletype” is the only dead giveaway that it was written before desktop and laptop computers took hold, but honestly, if they changed the word teletype to desktop or mainframe or anything — you wouldn’t be able to place this as far back as it was written.

Even the way that the United States (now Canada and the US combined) was run felt like it was ripped from the headlines of today, not 50 years ago.

The book itself was really believable which made it even scarier.  I found myself thinking, oh yea, this is definitely plausible and honestly should be on the mind of every single engineer who is working on AI in some for or another.

I’ve read other books with an AI who does things that are not expected and this was definitely as enjoyable as those books.  I can tell that Jones was way ahead of his time in the things that he was scared of.

The narration by P.J. Ochlan really lent itself well to this audiobook, he was able to voice this in a way that really made it feel like I was there while all of this was happening.  Combine that with Jones’ incredible insight into what computers might become and you have a great technothriller.

Charles Forbin has dedicated the last ten years of his life to the construction of his own supercomputer, Colossus, rejecting romantic and social endeavors in order to create the United States’ very first Artificially Intelligent defense system.

Colossus is a supercomputer capable of in-taking and analyzing data rapidly, allowing it to make real-time decisions about the nation’s defense.

But Colossus soon exceeds even Forbin’s calculated expectations, learning to think independently of the Colossus Programming Office, processing data over one hundred times faster than Forbin and his team had originally anticipated.

The President hands off full control of the nation’s missiles and other defense protocols to Colossus and makes the announcement to the world that he has ensured peace.

However, the USSR quickly announces that it too has a supercomputer, Guardian, with capabilities similar to that of Colossus.

Forbin is concerned when Colossus asks – asks – to communicate with Guardian. The computer he built shouldn’t be able to ask at all…

Colossus and Guardian begin to communicate, quickly bypassing existing knowledge … and the parameters placed on them by their creators. They are perfectly smart and totally in control. However, they lack human empathy and emotion, creating horrific scenarios.

Colossus and its Russian counterpart, Guardian, soon compromise US military secrecy, ultimately subjugating their creators with the threat of nuclear war.

And while Colossus has been specifically designed not to understand emotion - so as to make quicker and more logical decisions about America’s safety - this is exactly the thing that makes him so lethal; Colossus does not experience human empathy and is incapable of understanding the moral ramifications of his decisions.

Having handed over total control of American defense missiles to Colossus, the President and Forbin must act quickly to shut down the unstable machine.

Will Forbin be able to take down the machine he’s spent ten years building?

Will Colossus cause real damage before it’s too late?

Find out in D.F. Jones’s thrilling novel Colossus, which deals with the ongoing battle - both physical and philosophical - between man and machine, addresses the author’s own apprehensive attitude towards our future. His message is still as poignant and moving today and when the novel was originally published in 1966.

Dennis Feltham Jones was a British Science Fiction author; he was a Naval Commander in World War II, and lived in Cornwall until his death in 1981. His writings dealt with the ongoing battle – both physical and philosophical – between man and machine. He is perhaps most famous for his Colossus series, which was translated to the big screen in 1970 for the film Colossus: The Forbin Project, which was well received by critics, and was nominated for a Hugo Award in 1971.