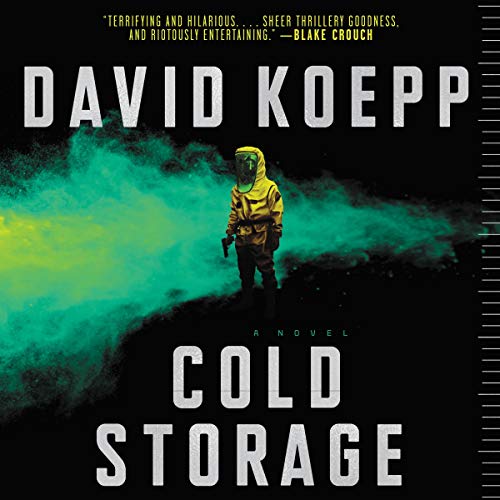 I hate to start a review like this, but I was disappointed by this book.  Cold Storage had the potential to be such an interesting and unique book – but it falls flat in a few areas.  I’ll go through why I thought that but I’ll also explain why it’s not a total dud.

Right away, it’s clear that Koepp did his research – the introduction explains how a fungus reproduces and goes into the typical introduction of the largest living thing on Earth being a fungus (Armillaria ostoyae to be exact).  So, I’m excited.  I think I’m in for a great story similar to The Genius Plague or Fungoid but honestly that was about as much “real” science that was included in Cold Storage.

There are parts where Koepp goes into the “mind” of our fungus in Cold Storage – the fungus has a voice and it’s kind of an annoying one.  I’m totally fine with going “into the mind” of a killer thing – but when it comes to a “must kill human” zombie-like droning it just feels a little childish.  And then when we’re shown how it got out in the first place – it just felt like Koepp was trying to hard to make a non-funny book funny – which just rubbed me the wrong way.

I was about 80% through the book when I tried to figure out what the main story actually was.  I understand that it is most likely Diaz and his relentless fight against this fungus – but until this point we’ve only had 10 minutes with Diaz and the last 7 hours have been devoted to talking about seemingly random people’s lives that don’t really have a ton of meaning to the story.  In any horror film – the first to die doesn’t even get much screen time – let alone and hour and twenty minutes of backstory before they’re killed.

So, I think part of my problem with Cold Storage is that it’s a book written in my all-time favorite genre about something that can be really well done (see the other two books I mentioned earlier). Had I gone into this looking for a “fun thriller” or even as Blake Crouch called it “terrifying and hilarious” then I probably would have loved it.  It just felt like it was trying to hard to not be serious that it lost it’s way a little bit. A hard science fiction story about this exact story would have been utterly terrifying and would have probably gotten book of the year from me. But the way that Koepp went about it just didn’t feel right for the tone this story deserved.

When Pentagon bioterror operative Roberto Diaz was sent to investigate a suspected biochemical attack, he found something far worse: a highly mutative organism capable of extinction-level destruction. He contained it and buried it in cold storage deep beneath a little-used military repository.

Now, after decades of festering in a forgotten sub-basement, the specimen has found its way out and is on a lethal feeding frenzy. Only Diaz knows how to stop it.

He races across the country to help two unwitting security guards - one an ex-con, the other a single mother. Over one harrowing night, the unlikely trio must figure out how to quarantine this horror again. All they have is luck, fearlessness, and a mordant sense of humor. Will that be enough to save all of humanity?

Infection by M.P. McDonald (Narrated by