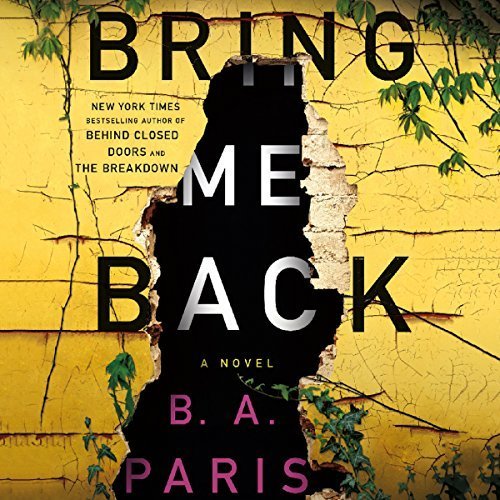 Kept Me Listening To The Last Page

Having really enjoyed B.A. Paris’ debut novel, Behind Closed Doors and her subsequent work, The Breakdown, I was thrilled to learn that Paris was releasing a third book, Bring Me Back. I could barely contain my excitement–the anticipation was almost painful! After listening to Bring Me Back, I feel compelled to admit that it wasn’t my favorite B.A. Paris story, but I still think it’s a captivating tale and completely worth a read.

Bring Me Back is another “psychological suspense” thriller that will leave you guessing until the very end. Finn and Layla are “young and in love,” and trading the pressures of London for a relaxing, rejuvenating vacation in France, when Layla disappears from a rest stop. A decade later, Finn and Layla’s sister Ellen have bonded over their shared grief and are romantically involved. As news of their engagement spreads, little Russian dolls (a childhood favorite of Layla) begin appearing without explanation. Sometime later strange emails begin to appear in Finn’s inbox. Wondering who is responsible, and what they might know about the night Layla disappeared, Finn begins to question everything and everyone.

In typical B.A. Paris fashion, Bring Me Back begins in the heat of the action, with a flashback told from Finn’s perspective, the night of Layla’s disappearance. It alternates between two time periods, “then” and “now,” and two narrators, Finn and Layla. I found their character development (and that of the other main characters) a bit underwhelming–they all seemed a bit one-dimensional to me–but I wasn’t particularly surprised as this seems to be a primarily plot-driven novel, rich in foreshadowing, imagery, and uneasy tension.

I was immediately pulled into Bring Me Back, wondering what really happened to Layla, who was responsible for her disappearance, and what their motivations might have been.  Cathleen McCarron, the narrator responsible for Layla’s perspective, helped shape Layla’s character for me, creating an eerie, unsettling feeling that kept me interested and constantly wondering what exactly was going on. Similarly, Kevin Hely delivered a strong, frequently emotional performance that had me alternatively sympathizing with and suspecting Finn throughout the book.

While Bring Me Back is not particularly fast-paced (until the last chapter or two), the very first moments of the novel will leave you feeling invested like you absolutely must get to the bottom of what happened to Layla, and will keep you reading (or listening) until the very last page.

The new twisty, gripping audiobook from B. A. Paris, the author of the instant New York Times and USA Today best-selling titles Behind Closed Doors and The Breakdown

“We’re in a new Golden Age of suspense writing now, because of amazing books like Bring Me Back, and I for one am loving it.” (Lee Child)

She went missing. He moved on. A whole world of secrets remained - until now.

Finn and Layla are young, in love, and on vacation. They’re driving along the highway when Finn decides to stop at a service station to use the restroom. He hops out of the car, locks the doors behind him, and goes inside. When he returns Layla is gone - never to be seen again. That is the story Finn told to the police. But it is not the whole story.

Ten years later Finn is engaged to Layla’s sister, Ellen. Their shared grief over what happened to Layla drew them close, and now they intend to remain together. Still, there’s something about Ellen that Finn has never fully understood. His heart wants to believe that she is the one for him...even though a sixth sense tells him not to trust her.

Then, not long before he and Ellen are to be married, Finn gets a phone call. Someone from his past has seen Layla - hiding in plain sight. There are other odd occurrences: long-lost items from Layla’s past that keep turning up around Finn and Ellen’s house. Emails from strangers who seem to know too much. Secret messages, clues, warnings. If Layla is alive - and on Finn’s trail - what does she want? And how much does she know?

A tour de force of psychological suspense, Bring Me Back will have listeners questioning everything and everyone until its stunning climax.