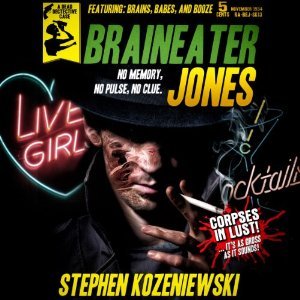 Waking up without your memory is a real buzzkill.  Waking up without your buzzkill to realize that you’ve crossed over to the other side is really confusing.  Braineater Jones awakens facedown in a pool having no idea who he is or how he came to die.  He vows to find out who he was and who killed him.  Along the way, he finds friends in unlikely places (and unlikely forms) and starts up a little detective business.

The narration for Braineater Jones was done by Steve Rimpici and he does a really great job.  He had that perfect “noir” voice for Jones.  The few times that the scenes required it, he was able to switch his voice to show what Jones was going through and how he was feeling.  I really enjoyed Rimpici’s narration and he definitely made the book more entertaining than it already was.

I honestly was not sure how I was going to feel about this book.  I really went into it with the thought that I wasn’t going to enjoy it, but boy was I wrong.  I usually don’t love noir or time pieces, but I really enjoyed this.  I was able to transport myself back in time because of how well Kozeniewski wrote.  Yes, there were sometimes that language or themes might bug some people (but the author warns you of these at the very beginning).

I just kept going back to this book.  It kept sucking me in and making me want to figure out more and more about Jones’ new and former life. It was written in such a way that I had to figure out what happened.

If you enjoy older noir-like fiction, zombie main characters, or an old school private eye type of a story, look no further than Braineater Jones.

Braineater Jones wakes up face down in a swimming pool with no memory of his former life, how he died, or why he's now a zombie. With a smart-aleck severed head as a partner, Jones descends into the undead ghetto to solve his own murder. But Jones' investigation is complicated by his crippling addiction to human flesh. Like all walking corpses, he discovers that only a stiff drink can soothe his cravings.

Unfortunately, finding liquor during Prohibition is costly and dangerous. From his Mason jar, the cantankerous Old Man rules the only speakeasy in the city that caters to the postmortem crowd. As the booze, blood, and clues coagulate, Jones gets closer to discovering the identity of his killer and the secrets behind the city's stranglehold on liquid spirits. Death couldn't stop him, but if the liquor dries up, the entire city will be plunged into an orgy of cannibalism. Cracking this case is a tall order. Braineater Jones won't get out alive, but if he plays his cards right, he might manage to salvage the last scraps of his humanity.

Stephen Kozeniewski lives with his wife of 9 years and cat of 22 pounds in Pennsylvania, the birthplace of the modern zombie. He was born to the soothing strains of “Boogie With Stu” even though The Who are far superior to Zep, for reasons that he doesn’t even really want to get into right now. During his time as a Field Artillery officer, he served for three years in Oklahoma and one in Iraq, where due to what he assumes was a clerical error, he was awarded the Bronze Star. The depiction of addiction in his fiction is strongly informed by the three years he spent working at a substance abuse clinic, an experience which also ensures that he employs strict moderation when enjoying the occasional highball of Old Crow. He is also a classically trained linguist, which sounds much more impressive than saying his bachelor’s degree is in German.