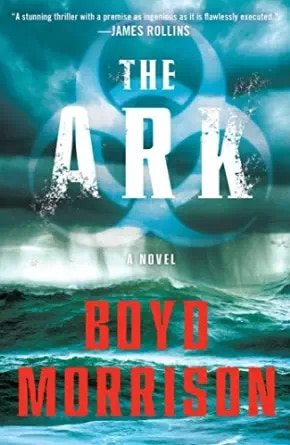 Sifting through Bible tales has never been more fun!

I have to admit that I was drawn in by the cover on this book — I’m kind of a sucker for anything that includes a biohazard symbol.  Some of my favorite fiction have on the cover or within the book some form of biohazard/bio-creation/etc. (Jurassic Park-esque).

This guy really knows how to compel a reader, and this book is no different. He had me from the get-go and it felt like he tied me into my seat and forced me to read this — but I’m not complaining.

A great historical fiction book in the same vein of The DaVinci code, except this time they are looking for “The Ark”. Great male AND female main characters, and just an overall fun time.

Every emotion the characters go through is felt by the reader, and Morrison’s research into tiny details just blows my mind (Tesla roadster and the biggest dump truck in the world are just two examples).

A fun AND great read for any time of year.

In national bestselling author Boyd Morrison’s debut, the unraveling of one of the greatest archeological mysteries from the bible—Noah’s Ark—could threaten civilization itself in this blockbuster hailed by James Rollins as “a stunning thriller.”

When brilliant archaeologist Dilara Kenner is contacted by Sam Watson, an old family friend who says that he has crucial information about her missing father, Dilara abandons her Peruvian dig and rushes to Los Angeles to meet him. But at the airport, Sam speaks instead of Noah’s Ark—the artifact her father had long been searching for—and the possible death of billions. Before Sam can explain, he collapses. With his dying breath, he urges Dilara to find Tyler Locke—a man she’s never heard of.

Two days later Dilara manages to track down former combat engineer Tyler Locke on an oil rig off Newfoundland. Her helicopter transport goes down well short of the oil rig’s landing pad and Dilara and those aboard nearly drown. No sooner is Dilara safely on the rig than she convinces Tyler the crash was no accident. Tyler agrees to help her uncover the secret behind Noah’s Ark and, more important, her father’s disappearance. As the picture begins to come into focus, they realize they have just seven days to find the Ark before its secret is used to wipe out civilization once again.

With a chilling premise and a blistering pace, Boyd Morrison combines all the best elements of a blockbuster thriller with an intelligent and fascinating exploration of one of the Old Testament’s great mysteries.