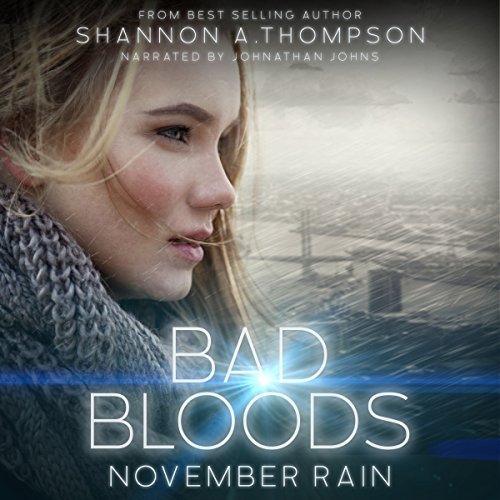 This was the kind of book that I could take it or leave it because I really felt like something was missing. It’s very much a character-driven story, which I like, but I also like a bit of world building too. I felt like this was missing a big bit of the world building. We know there is political turmoil going on but we don’t know why. We know that there are only two “flocks” of bad bloods left but we don’t know why. We also don’t know why the two flocks are separate and why they don’t really talk. There was too much missing for me to get fully invested in the story,

Character wise, while there are two main ones, Serena or Daniel, we also get to see some of the flocks they belong to. Each chapter of this is told from either Daniel or Serenas POV, which I liked. I also liked thee concept of the story, I just wish there was more depth to it!

I don’t know what else to say about November Rain because even though I liked it, I just have a lot of negative thoughts about it! I’m on the fence with regards reading the next in the series because I’d need to make sure the world building is better and we get some answers first!  Sometimes it’s hard to tell with a book that’s shorter (like this one) if they are building up to something more or just going to leave each story with more questions like they did in this one.

The narrator was ok. I did find that he didn’t differentiate the characters enough and it was only the fact that the chapters said who was talking that I could follow along. Other than that, he read it ok.

Seventeen-year-old Serena isn't human. She is a bad blood, and in the city of Vendona, bad bloods are executed. In the last moments before she faces imminent death, a prison guard aids her escape and sparks a revolt. Back on the streets determined to destroy her kind, Serena is spared by a fellow bad blood named Daniel. His past tragedies are as equally mysterious as her connection to them. Unbeknownst to the two, this connection is the key to winning the election for bad bloods' rights to be seen as human again. But Serena is the only one who can secure Vendona's vote. Now, Daniel must unite with her before all hope is lost and bad bloods are eradicated, even if it means exposing secrets worse than death itself. United or not, a city will fight, rain will fall, and all will be threatened by star-crossed love and political corruption.

Shannon A. Thompson is a young adult author, avid reader, and a habitual chatterbox.

As a novelist, poet, and blogger, Thompson spends her free time writing and sharing ideas with her black cat, Bogart, named after her favorite actor, Humphrey Bogart. Her other two cats bring her coffee. Between writing and befriending cats, Thompson graduated from the University of Kansas with a bachelor’s degree in English with an emphasis on creative writing, and her work has appeared in numerous poetry collections and anthologies. Represented by Clean Teen Publishing, Thompson is the best-selling author of the Timely Death trilogy and the Bad Bloods series. When she is not writing, she is climbing rooftops, baking cookies, or watching KDramas in the middle of the night, often done with her cats by her side.