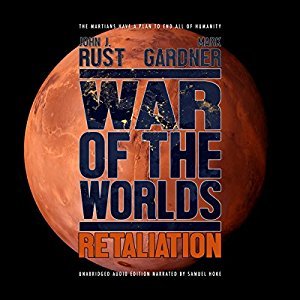 I picked this book up and set it down a few times before being able to get through it.  I love science fiction and don’t even mind that it’s a sequel — but there was something about the way this book was written that just didn’t sit well with me.  That being said, I did finish it (which I don’t alway do).

What this book helped me realize is that alternate history books can be awesome when some of the research is done correctly.  Even if it’s meant to be a crazy different timeline there are still things that make more sense now than they would back then. Retaliation had some of this and while other parts felt just right.

The action of this book was really well written. I can tell a lot of time went into crafting the perfect action scenes and making them flow from one to another. The ability to keep a book packed with this much action without making it feel overdone surprised me.

A slightly ‘cinematic’ narration — War of the Worlds Retaliation both hit and missed marks throughout.  I don’t know if it’s because it’s been a long time since I’ve read the original War of the Worlds or what, but the intro/first few chapters felt really hard to get into for me.  Sure there was action almost right away but I wasn’t 100% sure why things were happening the way they were.

The narration for War of the Worlds Retaliation was done by Samuel E. Hoke III who does a really nice job.  Professionally recorded with lots of stuff going on, Hoke allows this book to flow nicely.

1898: Martian tripods lay waste to Earth’s cities. The world’s armies are unable to stem the tide of destruction. When all hope appears lost, common bacteria kills the alien invaders. From the ashes, the human race uses the technology left behind by the Martians to build new, advanced weapons.

1924: Armed with their own spaceships, tripods, and jet fighters, the nations of the world are ready to take the fight to Mars. George Patton, Erwin Rommel, Charles de Gaulle, and Georgy Zhukov lead their troops in battle across the red planet to end the alien menace once and for all. But the Martians have one last, desperate plan to try, and if successful, it could mean the end for all humanity.

John J. Rust was born in New Jersey. He studied broadcasting and journalism at Mercer County Community College in New Jersey and the College of Mount St. Vincent in New York. He moved to Arizona in 1996, where he works as the Sports Director for an Arizona radio group.

Mark Gardner is a US NAVY veteran. He lives in northern Arizona with his wife, three children and a pair of spoiled dogs. Mark holds a degree in Computer Systems and Applications, and is the Chief Operator for an Arizona radio group.