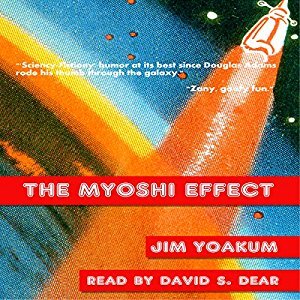 This might be one of the most awkward books I’ve ever listened to.  And I mean that in an endearing way.  The Myoshi Effect is a bizarre and interesting satire about the United States, a girl sucking on a rocket pop, friggin Canadians, and many other things that I can’t even list here for fear of ruining the book.

If you don’t enjoy good satire or a random laugh, then this book isn’t for you.  But if you like to laugh at the most ridiculous and random things — this is a great respite from the world around us. The innuendos between the two presidents might be one of the funniest scenes I’ve read/listened to in a book in a long time.

But, seriously — Myoshi Effect was good.  I enjoyed it from beginning to end.  I could tell that Yoakum had a point to it all (even if that point was to make the user laugh). And it was the perfect length to not feel drawn out.

David S. Dear does the narration for it giving each and every character (and there were quite a few of them) a voice.  Some of them were better than others.  I definitely like the general who basically acted like a hype man, some of the Canadian voices (mostly because they made me laugh — I live really close to Canada), and the two presidents. His narration definitely helped this already ridiculous and funny satire be even more ridiculous and satiristic (even though that’s not a word).

The time? Tomorrow. Can the United States of America and the United Blue States of America come together and stop a giant asteroid before it destroys Earth in one month's time? Who is the mysterious Doctor Apophis? What is the S.U.R.? What the hell is the Canadian army doing in North Dakota? And what is... "The Myoshi Effect"? 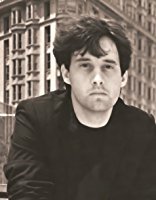 JIM YOAKUM has been a professional writer for over thirty years. He is the author of non-fiction books, novels and is the screenwriter of three produced films (“Twisted Fortune,” “Queen of Media,” “The Waking.”) He has contributed articles to numerous magazines, websites and periodicals including Rolling Stone, Popmatters, The Onion and Goldmine. He was former writing partners with the late Graham Chapman of Monty Python and is U.S. Curator of the Graham Chapman Archives. Some of his other writings can be seen at thearchivest.wordpress.com, and thearchivest.tumblr.com. He lives in America. Listen to a select list of his books on audible.com

The Caretaker (A Short Story) by Jason G

One thought on “Audiobook: The Myoshi Effect by Jim Yoakum (Narrated by David S. Dear)”