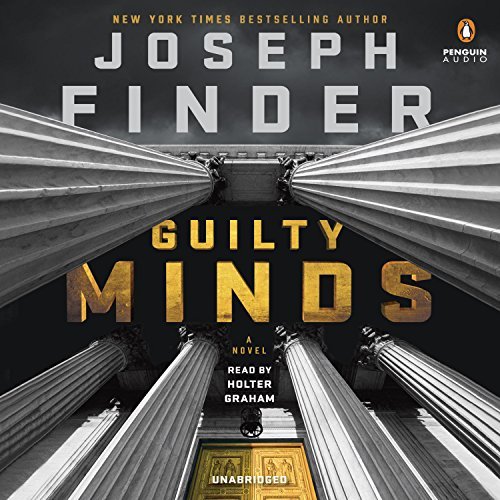 A tight thriller with no room for error

I’ve been a Joseph Finder fan for quite some time and every time I finish of his books I think “how come I haven’t read more of them?” He’s an amazing author who can really weave a great story from beginning to end.

Guilty Minds is no different — I was hooked from the beginning and it kept me on the edge of my seat throughout.

The story takes place in and around the DC area where the chief justice of the Supreme Court is about to have a defamatory article come out about him that is believed to be completely untrue.  So they hire Nick Heller to come in and try and disprove the entire story in under 48 hours. What follows is one of the tightest private eye/thrillers I’ve read in quite some time.

I honestly bought this book for two reasons — I really enjoyed other Finder books and I absolutely LOVE the cover on this.  It’s just perfect — and after reading the book, it really is perfect.

Guilty Minds was a fast-paced thriller that I enjoyed from beginning to end.  The story itself was incredibly believable and felt like it was ripped from the headlines.  Every single character that Heller comes across or that the book introduces felt real.  I felt like these were real people that you would encounter.  When you can make a reader feel like they’re being transported to another world or if they feel like they have actually met characters they’re reading about, you are doing something right.  Finder is definitely doing something right.

New York Times best-selling author Joseph Finder delivers an exhilarating and timely thriller exploring how even the most powerful among us can be brought down by scandal and how the lies we tell one another – and ourselves – can never truly stay buried.

The chief justice of the Supreme Court is about to be defamed by a powerful gossip website called Slander Sheet, which specializes in dirt on celebs and politicians. Their top reporter has written an exposé claiming that the chief justice had liaisons with an escort, a young woman willing to appear on video and tell the world her salacious yet convincing tale. But the chief justice is not without formidable allies, and his greatest supporter is determined to stop the story in its tracks.

Nick Heller is a private spy – a private intelligence operative based in Boston, hired by lawyers, politicians, and even foreign governments. Known as both a maverick and a dedicated, high-powered investigator, he’s called to Washington, DC, to help out in this delicate, potentially explosive situation.

Nick has just 48 hours to prove the story about the chief justice is baseless. But when the call girl is found murdered, the case takes an unexpected and dangerous turn, and Nick resolves to find the true mastermind behind the Slander Sheet story before anyone else falls victim to the maelstrom of political scandal and ruined reputations predicated upon one carefully concealed secret.

Buy from Audible
Also by this author: The Switch

Audiobook: Federal Undergroun by Jeff Be