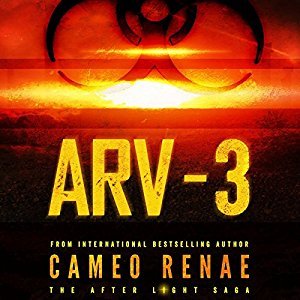 Teenage Love Despite The Apocalypse

ARV-3 has been on my to-read list for quite some time.  It’s that bio-hazard sign that sucks me in.  This was the first book by Cameo Renae that I read, so I wasn’t sure what to expect out of it.

ARV-3 (or anti-radiation vaccine) was meant to be their last chance of hope.  The government was running out of time and wanted to save as many people as they could before radiation killed them all.  Unfortunately, ARV wasn’t fully tested on humans so they couldn’t know what would happen.  They couldn’t have imagined what came next.

The story revolves around Abby and the people from her bunker as they try and survive underground and then again out of the bunker.  Abby was your typical strong-willed female protagonist.  She was strong, smart, and able to complete almost anything put in front of her.

The story itself was interesting to me.  It wasn’t much about the actual ARV mutation or virus or any of that but much more about the after effects of it.  The post in post-apocalyptic.

My biggest issue with ARV-3 was what I would call “forced teen romance.”  I don’t think this book was aimed at me (a male in my 30’s) but a lot of the dialogue and romantic moments felt awkward and forced. Sure, they’re teenagers and what isn’t awkward at that age? But it was hard to follow at some points.  Some of the characters seemed to have an off/on switch for certain things (not thinking about something ever in your whole life, to it being the only thing you can think of). While other things just felt “too good to be true”.  Ironically, this happened while the world was falling apart around them.

With that being said, I still really found myself enjoying the book.  There were a couple times where I thought, okay, okay, come on, let’s stop talking about the romance there are “arvies” all around you!

But, overall ARV-3 was a great story that we a little side-tracked by some teenage romance. I still enjoyed it and will definitely keep going with the series. The story itself drew a lot of parallels to other books and movies I’ve enjoyed which are definitely keeping me interested.

The narration of ARV-3 was done by Erin Moon who I thought did a pretty good job.  There were a few accents or people that she did that weren’t perfect, but at the same time, I cannot imagine that’s easy to pull off.  Ironically my least favorite voice that Moon did ended up fitting her character so well by the end that it grew on me.

The beginning of the end. The Apocalypse.

A nuclear fallout wiped out every living thing on the planet, except for a few thousand of us who took shelter in underground bunkers across the globe. Now, after thirteen long years, we were finally able to return to the topside to begin to rebuild.

We thought we were alone. We were never more wrong.

Before the fallout, scientists had worked on creating an anti-radiation vaccine (ARV). The first two attempts failed, but despite the incomplete tests and results, the government approved and distributed the third serum to the masses in an effort to aid those who had no shelter.

It worked, keeping those who remained on the topside alive, but it also altered and mutated them. This new and infectious threat had completely outnumbered us. Now, we not only had to rebuild our planet. We would have to fight for it.

My name is Abigail Park. I’m seventeen, and this is my story. 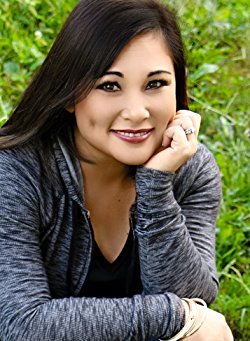 Cameo Renae was born in San Francisco, raised in Maui, Hawaii, and now resides with her husband and children in Alaska.
She’s a daydreamer, caffeine and peppermint addict, who loves to laugh, and loves to read to escape reality.
One of her greatest joys is creating fantasy worlds filled with adventure and romance and sharing it with others. It is the love of her family and amazing support of her fans that keeps her going.
One day she hopes to find her own magic wardrobe and ride away on her magical unicorn. Until then…she’ll keep writing!