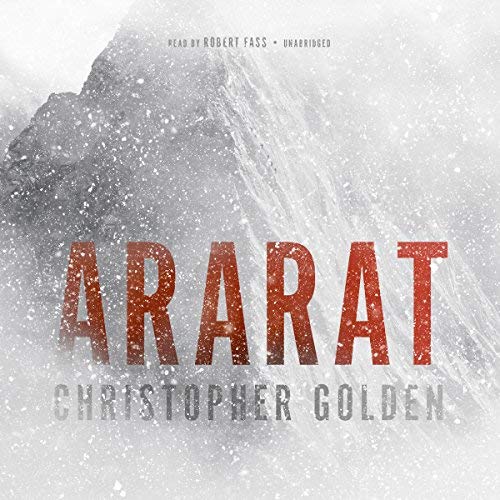 Christopher Golden has one of those writing careers that just makes you wish you had it for yourself. He has written several stories in the worlds of our favorite series like Alien and Predator. He has worked with the outstanding Mike Mignola of Hellboy fame to co-create two cult-favorite comic series, Baltimore and Joe Golem.

His short stories have appeared in near countless anthologies, some of which in he performed editor and curator. A speaker, podcast, co-host, and screenwriter are just a few more of his accomplishments. In short, he’s earned any and all accolades that could come his way so when I saw this title appear in my “Maybe You’ll Also Like” list, I felt pretty confident that it would be a good decision.

Ararat is the story of a major discovery of Biblical proportions and the hell that followed. In Turkey, after a major earthquake, a cave opened up on the side of Mount Ararat revealing what could only be described as a large wooden boat.

I think you see where this is going…

A team of international scholars and researchers make their way into the seemingly impossible wreck, led by a husband and wife team of adventurers who stake the claim first. Inside, they find a sarcophagus hidden in the depths and securely locked tight.

Again, I think you see where this is going…

They open up the sarcophagus only to find the skeletal remains of something not human. Something with a horn on its head. Something that should have stayed locked up.

Golden does a masterful job of building tension and creating a plausible situation from the implausible. A cast of distinct and different characters are used, and their interactions feel authentic and real, which does an excellent job of delivering the chills the story intended. However, there were some pacing difficulties were some scenes felt rushed and others went a little too long. It wasn’t enough to ruin the story, but it was enough to be noticed.

Narration by Fass was fluid and easy to listen to. His ability to feign an accent was helpful for the various nationalities and ethnicities present in the story, but his attempt at female voices was distracting at first due to the forced intonation of a higher register. This became something to get used to as the story went on, however, it could be distracting to some.

Christopher Golden's Ararat is the heart-pounding tale of an adventure that goes wrong - on a biblical scale. When an earthquake reveals a secret cave hidden inside Mount Ararat in Turkey, a daring, newly engaged couple are determined to be the first ones inside...and what they discover will change everything.

The cave is actually a buried ancient ship that many quickly come to believe is Noah's Ark. When a team of scholars, archaeologists, and filmmakers make it inside the ark, they discover an elaborate coffin in its recesses. Inside the coffin, they find an ugly, misshapen cadaver - not the holy man they expected, but a hideous creature with horns. Shock and fear turn to horror when a massive blizzard blows in, trapping them thousands of meters up the side of a remote mountain. All they can do is pray for safety. But something wicked is listening to their prayers...and it wants to answer.