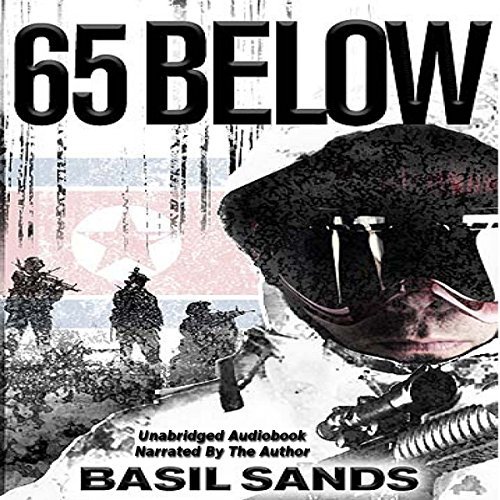 Felt So Real I Couldn’t Sleep

Once again, Sands wrote a better synopsis that I cannot beat: “A nearly forgotten bunker in the frozen wastes of Alaska is hiding a weapon that could end the world. And only Marcus Johnson and his team can keep it from falling into the worst possible hands.”

I don’t always do back-to-back books by the same author or narrator, but when I do — they take place in Alaska and are incredibly well written and thought out. Basil Sands can write and keep me reading way into the night (2am more than once) — thankfully I didn’t have the sun never rising (or setting) to keep me up later!

The most enjoyable part of 65 below was the combination of military and non-military. From the way that they talked about the situations that they were thrown into. The back and forth made this one of the most interesting, stressful, and fun books I’ve read in a while. Sands is able to write from a military point of view without completely alienating non-military people. His intimate knowledge of weapons, armies, and operational situations is unbelievable and thorough.

Marcus was one of those bad-A main characters that also had a soft side. This was shown in the multiple flashbacks to losing the love of his life (due to her coming back into his life). Obviously things like that cause the main character to do even more than they might have done to make sure that the woman he loves is safe and no longer under threat. Sure, it sounds a little cliche, but it wasn’t done in a sappy way.

The overall story of the book was pretty scary and as I said before kept me up at night to figure out what was going to happen. 65 below was both action-packed and well thought out. Sands took his time in the pacing and storytelling in this book and I think it paid off. I love a good bio-thriller and this book felt like it was on the cusp of it numerous times. I love the feeling of hopelessness that Sands was able to make me feel during parts of this – it felt that real.

Overall, another great book by Sands and another book I’m glad that I listened to by him. I’ll be looking to add more books written and narrated by him (both his and not).

A nearly forgotten bunker in the frozen wastes of Alaska is hiding a weapon that could end the world. And only Marcus Johnson and his team can keep it from falling into the worst possible hands.

Retired Marine Master Sergeant Marcus “Mojo” Johnson – returned to his family homestead in rural Alaska after twenty years of chasing bad men – enlists an elite team of combat veterans and personal friends to intercept the enemy before it releases a decades-old secret that can’t be destroyed and was never meant to be found. And it all plays out in the brutal, beautiful Alaskan wilderness, in sub-zero temperatures where human flesh freezes in mere minutes.

The chase is on, and only Mojo and his allies can stop the apocalypse before it begins.

Author of several action-packed novels and numerous short stories, Basil built an audience of tens of thousands of readers and audiobook listeners. His stories have been called “Pulse Pounding” and “Breathtaking”. Give them a read and judge for yourself.

Basil does not just write stories but has lived a lot of what they contain. The backdrop for his writing started with his birth in rural interior Alaska and his school years among the Ohio cornfields where he wished to be anywhere else as long as it was exciting. He has lived in Alaska, San Diego, DC, Baltimore, and Ohio. He tried a career in the Marines. After injuries sent him home early he worked at the NSA, owned a computer shop, was a carpenter, farmer, actor, lumberjack, voice actor, EMT, network admin, helpdesk supervisor, Boy Scout leader, IT trainer, radio talk host, youth minister, and was a sergeant in the Alaska Defense Force Coastal Scouts.

Until a ski injury in 2008 he had been an avid weight lifter and could bench press 420 lbs. Now he’s limited to a bit on the elliptical machine each day and hefting his laptop and an occasional pint of Guinness.

He served on the Board of Directors for the Alaska Writer’s Guild, is a member of the Military Writer’s Society of America and International Thriller Writers (ITW), and is a regular contributing editor to ITW’s THE BIG THRILL Magazine.

He lives in Anchorage Alaska with his wife and sons.