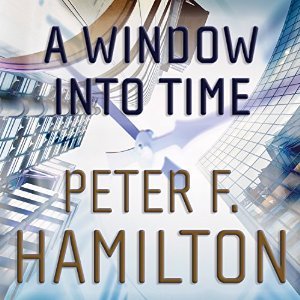 A glimpse into what time travel could be

Julian is a smart kid, he may be one of the smartest people in the world.  One day he has a vision, a memory of sorts, but the problem is — it wasn’t his memory.  He continues to get triggered into memories of this unknown person leading him deeper and deeper into the rabbit hole. That is until he finds out that this mysterious person he can connect memories with is about to come to a dark end.

The narration for A Window Into Time was done by Chris MacDonald who does a really nice job.  His voice and cadence were easy to follow along with and made a complicated story easier to follow.

A Window Into Time was a really well done short story but man was it a little tough to follow.  I think that it was written that way on purpose because the things that Julian was going through was to be felt by the reader.  The only problem with this was that most readers won’t be as smart as Julian. This short story was full of twists and turns and you really do feel for Julian as he is put through situation after situation.

Overall, I did enjoy A Window Into Time, but I felt like it was just too “jumpy” to be a full 5 stars. But if you like out of the box stories, especially about time travel and the likes — then this is definitely for you.

Whip-smart 13-year-old Julian Costello Proctor – better known as Jules – has an eidetic memory. For as long as he can remember, he has remembered everything. “My mind is always on,” he explains. But when an unexpected death throws his life into turmoil, Jules begins to experience something strange. For the first time, there are holes in his memory.

But that’s not the strangest part. What’s really weird isn’t what he’s forgotten; it’s what he remembers. Memories of another life, not his own. And not from some distant past. No, these memories belong to a man who’s alive right now.

With bravery, ingenuity, and quirky good humor, Jules devises a theory to explain this baffling phenomenon. While tracking down the identity of his mysterious doppelgänger, he finds himself enmeshed in the hopes and dreams of a stranger and caught in the coils of a madman’s deadly plot.