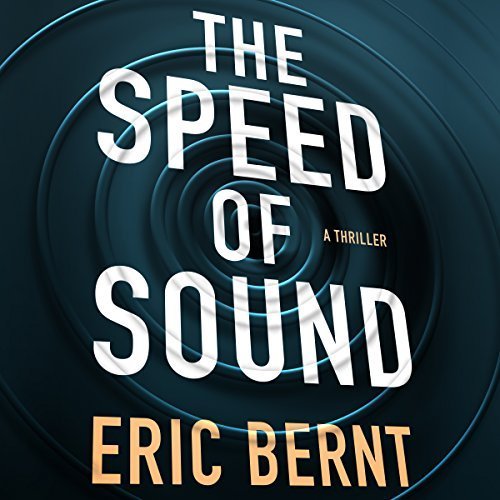 A Well Written Thriller Sure To Please

I have a rather eclectic taste in books. I’m down for anything–Sci-Fi, Post-Apocalyptic/Dystopian, Chick Lit, Memoirs, Historical Fiction, you name it, I’ll read it, so long as it’s a good story. Recently, I’ve been on a historical fiction kick, reading The Alice Network and Fortunate Ones and listening to The Address, The Lilac Girls, and All the Light We Cannot See. I’ve thoroughly enjoyed each of these pieces but oh man was I in need of a palate cleanser. I was looking for something…a little less historic. Brian suggested I check out The Speed of Sound and I was definitely not disappointed. My biggest gripe? The Speed of Sound is the first book in a series and the second book, The Sound of Echoes, isn’t due to be released until June of next year!

The Speed of Sound is a thriller centered upon an extraordinary young man, Eddie Park, who resides at Harmony House, a “special place for special people.” We quickly learn that Harmony House is funded by a governmental or quasi-governmental organization looking to control the intellectual property and technological developments created by the special people who live there, primarily highly-functioning autistic savants like Eddie, in the interest of national security. When Eddie’s creation, the “echo box,” successfully utilizes “acoustic archeology” to re-create sound waves, Eddie is ecstatic, hoping to use the box to hear his late mother sing. He demonstrates the box for Dr. Skylar Drummond, playing a rather compromising conversation involving the director of Harmony House. Dr. Drummond quickly realizes the box and its ability to recreate any conversation could have powerful and potentially dangerous consequences. She worries that Eddie and his echo box may be in imminent danger and the real story begins, as the pair embarks on a risky game of “tag,” trying to outrun and outsmart the “mystery man” and others anxious to get their hands on the Echo Box.

I was extremely impressed by every aspect of The Speed of Sound but was most captivated by Bernt’s portrayal of Eddie. As an undergraduate, I had the pleasure of knowing two remarkable young people much like Eddie and was happy to see Bernt present Eddie not as a strange and limited person but as a unique, talented individual with the power to change the world, hindered only by his inability to effectively communicate with those around him. Similarly, I found Dr. Drummond immediately likable. Driven by a deep-seeded and personal desire to serve the Autistic community, Dr. Drummond’s compassion and dedication to helping Eddie achieve his goals are almost palpable. The suburb characterization in this piece is enhanced by a phenomenal narrator, Christopher Lane. Lane’s voice was an excellent match for the Speed of Sound’s third person, omniscient point of view. His voice was the perfect embodiment of “the wizard behind the curtain,” an all-knowing narrator capable of telling us exactly what each character was thinking and feeling. His voice drew me in and wouldn’t let me go.

With a technological advancement capable of changing the world, a young, likable, main character, a few creepy, mysterious “bad guys,” a few altruistic “good guys,” and a fabulous narrator, The Speed of Sound is a well written and well-narrated thriller sure to please. As the first in a series, the only disappointment you’re likely to face is a bit of a cliffhanger at the end and the suspense and anticipation you’ll be forced to endure while you await the release of book two, The Sound of Echoes.

In this propulsive thriller, one of the most ingenious young men in the world has also become the most dangerous…or has he?

Harmony House is more than a “special place for special people.” It’s a think tank where high-functioning autistic savants harness their unique abilities for the benefit of society. Resident Eddie Parks’s contribution is nothing less than extraordinary: an “echo box” that can re-create never-recorded sounds using acoustic archeology.

All Eddie wants is to hear his late mother’s voice. But what he’s created is inadvertently posing a threat to national security.

To Harmony House’s shadowy government backers and radical extremists, the echo box is the ultimate intelligence asset - an end to the very concept of secrecy. Now for Eddie and the compassionate Dr. Skylar Drummond, the true nature of the institution is becoming chillingly clear.

As ruthless competing enemies close in on Eddie and his miraculous machine, Skylar risks all to take him on the run. Because once that prize is won, Eddie Parks will no longer be considered a “special person” but a dangerous redundancy. An inconvenient echo that must be silenced.