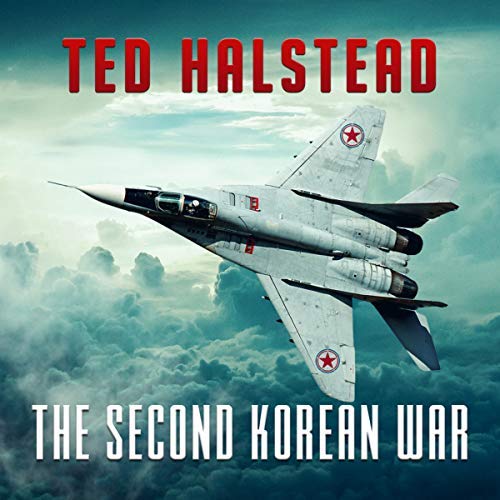 A “What If” Imagining a 2nd Korean War

The synopsis doesn’t give you too much (which in a way doesn’t spoil anything like some can) – but going into this I imagined that I was going to get introduced to a story where… a second Korean War was started.

I can tell that Halstead put a ton of heart and research into this book.  He is able to write something that makes you think and feel. But I’m always a little wary of a longer book like this – especially because usually in books in this genre – you don’t need 15 hours (or 540 pages as listed for the Kindle version) to tell a story like this.  8-12 would be perfect (300ish pages).  The reason I mention this is because Halstead introduces an enormous amount of characters to this story. And you get them from all sides.

It was incredibly hard to follow and unfortunately, the narration by Banning didn’t help as much as an audiobook could have.  A multi-casted audiobook would have been overkill for something self-published but when you have that many people needing to be voiced (so that they don’t all sound the same) it’s a lot to ask for anyone. I did think that Banning did about as good as you could expect someone with a monumental task and a long book like this.  There were scenes that he kept me interested in and then scenes that I was totally lost during.  Not all of that was on Banning though.

Overall, I thought that Halstead did a good job imagining a what if situation and telling it to us from a ton of points of view – probably too many, but that’s just my opinion.  I kept going from breezing through scenes to ones where I just felt like I needed a break. If you’re a fan of military fiction, lots of characters, and an original idea and plot – I do think you’ll enjoy The Second Korean War.

Two Russian agents discover a missing nuclear weapon was hidden in an American city by North Korea. Another nuclear weapon nears Seoul in a tunnel built by North Koreans. And North Korea's new military dictator launches an all-out invasion. Will Seoul or Pyongyang be the new capital of a united Korea?

Audiobook: The 5 Manners of Death by Dar