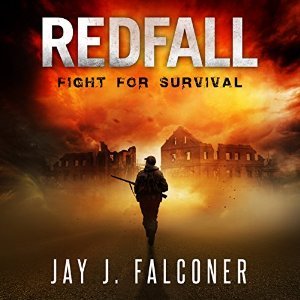 This book is terrifying because it’s possible

A man who has lost everything could be humanities last hope for survival from an unknown source.  Simon Redfall’s wife is executed live in front of a pay-per-view audience for the whole world to see.  While this is happening, things are going on behind the scenes that no one knows about.  Then, weird red rain begins to fall all across the country.  What happens next? You’ll just have to read to find out.

The narration for Redfall Fight For Survival was done by Gary Tiedemann.  I haven’t listened to any other books by Tiedemann, but that could change quickly because I really enjoyed his rendition of this book.  He really helped to bring Falconer’s words to life and make the story really pop off the page.  Falconer should rest easy knowing that when you are able to get a narrator that can do this it only helps your story.

This book starts out with a concept that I believe that I heard George Carlin make jokes about back in the day.  The funny part about it then (and now) is how true all of it could become very quickly.  Pay-per-view executions live on tv for all to see.  Yes, it’s gruesome and vile.  Falconers description of it was gross but needed.  I was trying to figure out what was going to happen from that one execution, but little did I know I was in for the ride that I got.

Insert a prepper compound in Amish country Pennsylvania that is run by children.  Yes, it sounds incredibly weird — but is an amazing breath of fresh air in the post-apocalyptic community.  Really, this whole book is that breath.  I haven’t been genuinely surprised with a direction of a PA book in quite some time.  This book had me on my heels the entire time because I felt like I was surprised at every turn.

My only complaint is that the story just ends.  And I genuinely mean that.  Sometimes I can tell when an author is gearing down to slow things down for the next book.  This book is the polar opposite.  Things started to pick up and then bam “continued in book two.”  The only reason I’m not talking more about this is twofold:  I was warned about it, and the second book is already released and I can listen to it ASAP.  I wonder if Falconer wrote the full story and then just sliced it down the middle.  I guess I’ll find out more in the next book.

Overall this is more than your average post-apocalyptic book, and I’m really glad that it was.

“This audiobook was provided by the author, narrator, or publisher at no cost in exchange for an unbiased review courtesy of AudiobookBlast dot com.”

Society will collapse in days… And that’s the good news.

Former Special Ops and survivalist Simon Redfall has lost everything: his wife, his fortune, and his future. Despite being hunted by angry mobs and his own bankrupt government, Simon arrives in Washington, DC to attend the first ever, pay-per-view execution of someone he loves.

Then red storm clouds appear and begin to spread their potentially toxic rain across the planet. The mysterious weather phenomenon grounds all travelers, knocks out communications, and threatens to take down the grid, sending civilization back to the Stone Age.

As society tumbles into chaos, Simon joins a group of like-minded preppers to unlock the secrets behind a terrifying global conspiracy. What he and his band of freedom fighters soon learn will put their lives at risk, and the lives of everyone else on the planet.

For humanity, time is running out . . . When the red rain stops falling, it will be too late to stop what’s coming next.

Book 1 in the American Prepper Series

Jay J. Falconer is a Kindle Press author, survivalist, prepper, engineer, and Sci-Fi junkie who lives in the mountains of northern Arizona where the brisk, clean air and stunning mountain views inspire his day.

When he’s not busy paying the bills with his regular, full time engineering job, he’s either trying to steal a few hours at night or on weekends to work on his next novel, or he’s out training, shooting, hunting, or preparing for whatever comes next.