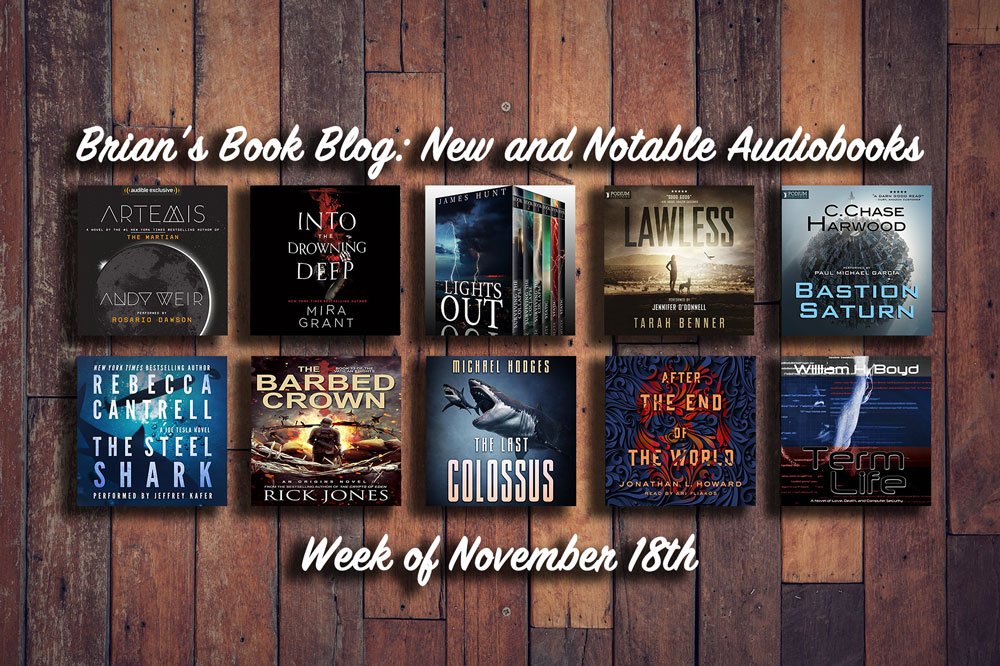 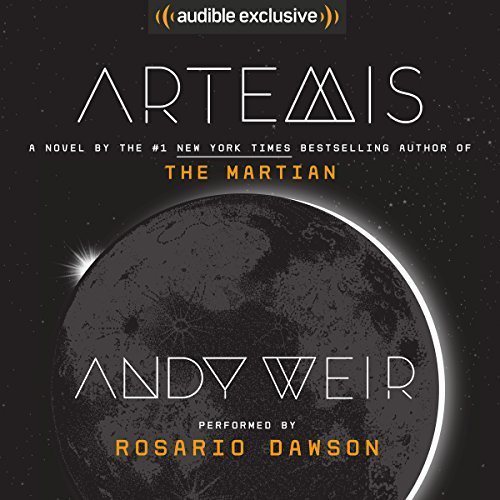 The best-selling author of The Martian returns with an irresistible new near-future thriller – a heist story set on the moon.

Jazz Bashara is a criminal. Well, sort of. Life on Artemis, the first and only city on the moon, is tough if you’re not a rich tourist or an eccentric billionaire. So smuggling in the occasional harmless bit of contraband barely counts, right? Not when you’ve got debts to pay and your job as a porter barely covers the rent.

Everything changes when Jazz sees the chance to commit the perfect crime, with a reward too lucrative to turn down. But pulling off the impossible is just the start of her problems, as she learns that she’s stepped square into a conspiracy for control of Artemis itself – and that now her only chance at survival lies in a gambit even riskier than the first.

Bringing to life Weir’s brash, whip-smart protagonist is actress Rosario Dawson (Marvel’s The Defenders, Sin City, Death Proof). With the breathless immediacy of one realizing they’re one cracked helmet visor away from oblivion, Dawson deftly captures Jazz’s first-person perspective – all while delivering sarcastic Weir-ian one-liners and cracking wise in the face of death. And with a cast of diverse characters from all walks of life calling Artemis home, Dawson tonally somersaults to voice Kenyan prime ministers, Ukrainian scientists, and Saudi welders. It’s a performance that transports listeners right alongside Jazz, matching her step for step on every lunar inch of her pulse-pounding journey.

Into The Drowning Deep by Mira Grant
Narrated by Christine Lakin

New York Times best-selling author Mira Grant, author of the renowned Newsflesh series, returns with a novel that takes us to a new world of ancient mysteries and mythological dangers come to life.

The ocean is home to many myths,

But some are deadly….

Seven years ago the Atargatis set off on a voyage to the Mariana Trench to film a mockumentary bringing to life ancient sea creatures of legend. It was lost at sea with all hands. Some have called it a hoax; others have called it a tragedy.

Now a new crew has been assembled. But this time they’re not out to entertain. Some seek to validate their life’s work. Some seek the greatest hunt of all. Some seek the truth. But for the ambitious young scientist Victoria Stewart, this is a voyage to uncover the fate of the sister she lost.

Whatever the truth may be, it will be found only below the waves.

But the secrets of the deep come with a price. 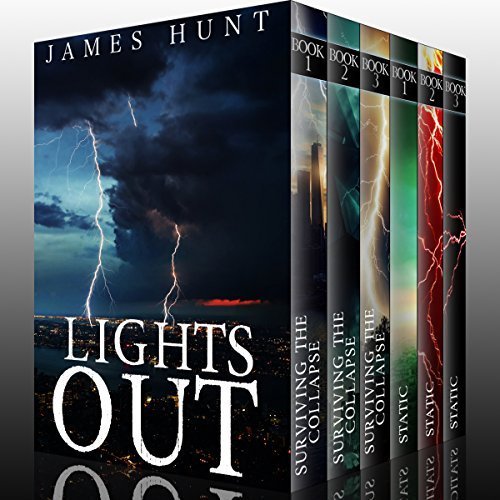 An unputdownable EMP thriller with a brilliant twist!

Best-selling EMP thriller author James Hunt, author of Surviving the Collapse and Static, which have collectively accumulated 200+ five-star reviews come together in this audio set for the first time!

Surviving the Collapse: A Tale of Survival in a Powerless World

What happens when all means of transportation and communication suddenly vanish? What happens when you can’t call for help? What happens when the only person you can rely on is yourself? Captain Kate Hillman is about to discover those answers after an EMP sends New York City, and it’s nine million residents, back into the stone age.

The thin thread holding the civilized world together has been severed. Millions of citizens have been thrust into the unknown, breeding fear into the minds and souls of those seeking to survive. Wren Burton, an architect from Chicago, has been engulfed by the chaotic aftermath of an EMP blast. Her family is injured. The enemy is unknown. And help is nowhere to be found.

From the author of The Fringe comes an addictive new dystopian saga.

When Lark was sentenced to 25 years behind bars, she thought San Judas was her lucky break. The primitive 16,000-acre community in rural New Mexico isn’t like any other prison. There are no cells, there is no warden, and Mother Mercy is the law.

She didn’t realize she’d be fighting for survival on a daily basis – battling hunger, violent inmates, and Mother Mercy’s iron fist. Lark’s only friend is Bernie – an off-the-rails environmental activist doing time for arson – and a mysterious stranger who’s been sending her illicit messages from the men’s colony.

Lark never thought escaping San Judas was possible until a message in a bottle changes everything: The guards outside the walls are disappearing, and the world as they know it is coming to an end.

In 2101, having conquered the Solar System, most humans are choosing to tie their minds to an Artificial Intelligence. The only place to be free of AI is living off-world, with Saturn and its vast system of moons serving as the wild frontier. The only caveats to living there: the funds to fly a billion miles into space and a pledge to keep vigil against the threat of AI. Otherwise, what you do out there is your business.

Career scoundrel/petty-thief Caleb Day finds himself broke and unemployed when he arrives at his new home among the colonists of Saturn’s moons, so he takes a job as a cop. When law enforcement takes a turn for the less-than-just, Caleb refuses to sit idly back. After rescuing and escaping with several civilians, Caleb and his new comrades are now fugitives who must beg, borrow, and steal their way across Saturn’s moon colonies to survive. Tensions rise as Earthlings begin looking at Off-Worlders as threats. Keeping his friends safe among Saturn’s moons is no longer Caleb’s only challenge – he must find a way to protect the last vestige of remaining free humans if they all want any hope at staying alive.

A swashbuckling space opera, Bastion Saturn is a dramatic, often humorous, action-packed romp that explores the best and worst of humankind while questioning the very definition of humanity.

The Steel Shark by Rebecca Cantrell
Narrated by Jeffrey Kafer

His dog. His computer. The tunnels under New York City.

That’s all Joe Tesla’s agoraphobia has left him with – the inside world, the dark world – and now the black depths of the sea.

In the latest book in this award-winning thriller series, Joe Tesla ventures out into the ocean depths in an underwater scavenger hunt. The competition turns deadly when a mystery sub rams Joe’s and leaves him for dead on the ocean floor.

Joe survives and his search for answers leads into a web of international intrigue and enigmatic weapons. When he shares his knowledge with the authorities, they bury his information and threaten to bury him as well. After a drone attack drives him out to sea, he realizes that he alone can discover the truth hidden in a rogue submarine…and save the city he loves from annihilation.

But can a man trapped inside by his own fears ever save the larger world above?

The Barbed Crown by Rick Jones
Narrated by Bill Burrows

In Auschwitz-Birkenau in 1943, a place where ashes rain down on a daily basis to cover the ground with a mantle of gray, a rebel force of Jews band together in a fight for survival.

A young Jewish woman from Warsaw and an SS guard lean on one another inside the death camp where violence is the norm, with brutal slayings and summary executions occurring daily. The stacks are constantly smoking, bodies are swinging from the gallows for days on end, and murder becomes a sport.

But as time moves on and a relationship grows to the point where two people learn what they are capable of, Frederic Becher, an SS guard who falls in love with a Jewish girl, lays the groundwork for the creation of one of the most formidable forces in the world – the juggernaut that would eventually become the Vatican Knights.

This is an Origins novel.

The Last Colossus by Michael Hodges
Narrated by Ian McEuen

Rugged adventure guide and “player” Ron Combs leads a group of thrill-seekers to an island off Washington’s coast. But when devastating lava flows destroy their boat and overtake the island, Ron and his clients are forced one-by-one into the sea, where a gigantic prehistoric predator awaits.

Trapped between the lava-covered island and the huge jaws of an ancient shark, Ron teams up with his client Rachel to devise a way to keep everyone safe…even if it means sacrificing himself in the process and finally changing his ways.

After the End of the World by Jonathan L. Howard
Narrated by Ari Fliakos

After the End of the World by Jonathan L. Howard brings the H. P. Lovecraft mythos into the 21st century.

The Unfolded World is a bitter and unfriendly place for Daniel Carter and Emily Lovecraft. In this world the Cold War never happened because the Soviet Union ceased to exist in 1941. In this world the Nazi Großdeutschland is the premier superpower and is not merely tolerated but indulged because, in this world, the Holocaust happened behind the ruins of the Iron Curtain and consumed only Bolsheviks, Communists, and others the West was glad to see gone. In this world there are monsters, and not all of them are human.

But even in the Unfolded World, there are still bills to pay and jobs to do. Carter finds himself working for the German secret security service to uncover the truth behind a major scientific joint project that is going suspiciously well. The trail takes Lovecraft and him to a distant, abandoned island and a conspiracy that threatens everything. To fight it, Lovecraft must walk a perilously narrow path between forbidden knowledge and soul-destroying insanity.

Fortunately, she also has a shotgun.

This dark, captivating audiobook will send listeners into a twisted version of the world they will be thankful not to inhabit.

Gus Bishop lives in a trendy downtown Austin condo. He works in computer security for a high tech Austin tech company and drives a high performance car. Yet, something is missing. Every woman he wants eludes him, and his company is under the threat of being hacked. But after an internet search, Gus meets a strange man who represents a unique insurance company.

Through big data analysis and some computer hacking of its own, this company insures its clients, not from death, but from a life that is no longer worth living. When Gus buys the policy, he must come to terms with his greatest fears and failures.

One thought on “New & Notable Audiobooks Week of November 18th”