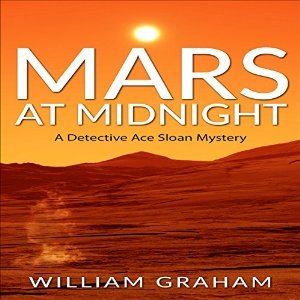 Another murder on Mars means Det. Ace Sloan is on the case.

Another murder on Mars — that means only one thing.  Ace Sloan is on the case once again.  This time, he has help from a new rookie partner. Kate Hammer will join in and help solve this new murder mystery.

Leslie Starr O’Hara narrates Mars at Midnight and does a great job.  It’s even nicer with the new addition of Kate Hammers character to this series.  O’Hara has the right amount of youthfulness combined with enough of a rough edge to voice both Hammers and Sloan. Going into this, I was slightly surprised to see a female narrator especially since it is an Ace Sloan book.  But the book was more split between the two characters than I original understood.

I’ve kept up with every Ace Sloan story so far and they are all similar in length, story, and plot-lines.  This one differentiates quite a bit in one aspect — the addition of a female detective.  It really calms down some of Sloan’s rough edges.  The addition of Hammer really allows growth in both Sloan and the Martian storyline that it’s been paralleling.

Easily my favorite part of this book (or any in the series) is the way that Graham is able to combine an old mystery vibe with a new science fiction locale.  It’s basically a whodunit on Mars, which is different than most stories that I read.

I was given a copy of this audiobook by Audiobook Reviewer in exchange for my honest and unbiased opinion. The original post can be found there.

Detective Ace Sloan (The Red Planet Murders) returns in this exciting and compelling murder mystery from author William Graham. Set in the Martian colonies in the 22nd century, Detective Sloan must solve the murders of two immigrant women found buried in the Martian dunes and of a famous college professor. What is the connection between the murders? Sloan and his rookie colleague Detective Kate Hammer uncover a secret political conspiracy as they try to solve the crimes. This work is a fast-paced thriller with a political intrigue and edge to it.

Poet, novelist and travel writer William Graham holds a BA and MA in English and a MS in Communications from Northwestern University in Evanston, Illinois.

He lives in Stowe, Vermont. Visit his travel blog at https://www.travelblog.org/Bloggers/Green-Mountains/.

Many of his books are also available on Audible.com