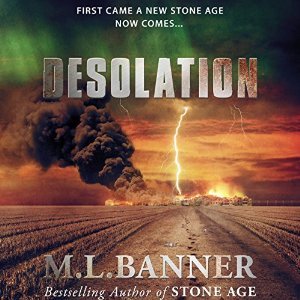 How do we survive this new world?

Desolation takes place after the storm that wiped out most of the world’s power and has devastated both people are places.

The narration was good for this.  I have no complaints but I don’t really know what else to say about it.  His voice was good for this type of fiction, but I didn’t come away wowed or bored — I don’t think this is the fault of the narrator, but more on the author.  This is better than some I’ve heard recently. I’d be interested in checking out other books that Naramore has narrated based on my enjoyment of his voice in this one.

I have to start my review off by saying that I did not read the original story in this series before reading this.  I’m kind of regretting that.  I’m not sure if the people in the Desolation came from Stone Age (book one) but there was little to no character development at all.  This is a series I would highly recommend you read the first before trying to read the second.  With that being said, I also don’t think this works as a stand-alone — for the reason listed above and because there wasn’t much explanation as to why the world was the way it was.  It was just a “this is how it is now” type of story.

I have a really hard time rating something like this because I don’t know if I would have liked it more had I read Stone Age or not.  The story just felt drawn out and kind of plain.  I seriously wonder if most of the bang were written in book one.

The story had some neat characters in it that had slightly better back stories and more interesting story arcs.  But overall most characters felt underdeveloped and underutilized throughout.

Overall, with not much to go on this book was missing quite a bit.  But I hate rating it low for that reason — so I’m going to give it an above average rating just because I did finish it.  It was enjoyable enough to read from beginning to end.

I may revisit this if I get a chance to read the other book and see what I think of it after I understand they who and why of some of the people within.

A world devastated: a sky filled with magical auroras at night and deadly radiation during the day; technology all but gone; hundreds of millions dead by fire, starvation, disease, and violence. The survivors will have to face their own desolation.

Three groups struggle to endure and hold onto what little they have, while others will do anything to take it all. On a beach in Mexico, a small town in Wyoming, and a rural ranch in Illinois, epic battles between good and evil will be fought. Winners will have to face forces of nature never seen before.

But, there is a dim light on the horizon. A 150-year-old secret may lead the lucky few to a place that holds the promise of a new future, unless the sun doesn’t set on humanity first.

This is the stunning follow-up to the #1 Amazon best seller Stone Age. 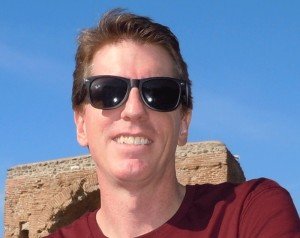 I devour the same books I enjoy writing: science fiction, but especially anything apocalyptic/post-apocalyptic or dystopian. I love stories about regular people being put into extra ordinary circumstances, and having to rely on their own cunning and that of others to survive.

Stone Age & DESOLATION are those kind of stories. They’re fast moving, have some regular and amazing characters who must make life changing decisions, all while the world is experiencing an apocalypse unlike anything imagined.

When not writing or reading fiction, my wife and I split time between Tucson, Arizona and the sunny beaches of Mexico. I also write for a few blogs, and I still write articles to assist small business owners for one of the companies I founded, SmallBiZ.com.

One thought on “Audiobook: Desolation by M.L. Banner (Read by Mikael Naramore)”