A NASA Engineer Uncovers a big secret on Mars

John Orville is an engineer for NASA who witnesses a new space station/colony come crashing down into California quickly ending his career with NASA. His wife and child were near the impact zone, and he isn’t sure if they got out safely. After spending months helping the search and rescue team look for survivors, John is about to give up everything. Right after he has this realization he is visited by a hologram from the Martian Mining Company looking for his engineering expertise. He decides he has nothing tying him to Earth and joins. After he arrives on the red planet he begins to realize quickly that things aren’t what they seem.

The Martian Conspiracy starts off a little weird. We spend a lot of time on Earth for a story that’s named “The Martian” anything. Granted, it’s all needed to explain John and what is going on with him, but it was hard to understand for a while. I actually found myself making sure I was listening to the right book for a second. But the story then moves to Mars and it really picks up from there.

The story was incredibly detailed with story and character arcs that were incredibly well thought out.

Johns’ character himself was a really easy person to follow along with. The way that he was written makes him one of those characters that as the story progressive you really find yourself wanting to follow him to the ends of the Earth (or space).

Overall, this was a really enjoyable sci-fi/mystery/thriller. I found myself staying up late listening to this because I was enjoying it so much.  Also, if you like planes — there is a lot of aeronautical stuff in this novel that will peak your interest.

The year is 2071. Devastated by the loss of his wife and son, NASA engineer John Orville signs up for a new life on Mars, implementing Project Bakersfield, a plan to neutralize troublesome Martian dust storms. After a military unit lands on Mars, supposedly for a training exercise, Orville discovers the true purpose of Project Bakersfield. With the military unit going rogue, and a massive superstorm threatening imminent destruction, Orville must fight to save the colony. 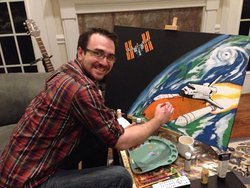 Shortly after receiving his pilot’s license as a Royal Canadian Air Cadet, John dropped out of Aerospace Engineering at Carleton University to pursue a degree (and career) in Corporate Finance. A few years later, his wife bought him a twelve-inch Dobsonian Telescope for Christmas (to be fair, she got leather boots). He joined the Mount Diablo Astronomical Society, volunteering as many as four nights per week under California’s cloudless skies. During his time at MDAS he began writing essays for the club’s magazine, Diablo MoonWatch, and later published his first book, 50 Things to See with a Small Telescope.