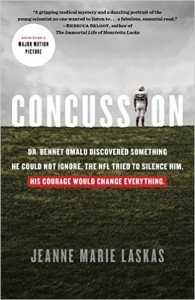 A look into the terrifying world of brain-related football injuries.

This was one of those book where I was excited to get a copy because I really enjoy reading a book before seeing a movie.  Especially a movie like this one (that the NFL does NOT want to come out).  I have watched the documentary that was based off of a similar book League of Change (it’s on Netflix, I recommend it).  So a lot of the information within this book wasn’t new to me but it was still a fascinating story.

The point of view was unique because there was a lot of internal monologue of the doctors thoughts.  This made for some confusing parallel conversations, especially in the beginning during the intro of the court hearing.

After reading this, I will definitely be seeing the movie that comes out starring Will Smith.  This book just had the feeling that this was opening Pandora’s box and we will never be able to get it shut again.

This is one of those take it or leave it books in my opinion.  The back-stories are un-needed and the incessant talking to himself within his head made this a difficult one to get through on top of being a tad bit dry at times.

I received a free copy of this book in return for my honest review.

Soon to be a major motion picture starring Will Smith, Concussion is the riveting, unlikely story of Dr. Bennet Omalu, the pathologist who made one of the most significant medical discoveries of the twenty-first century, a discovery that challenges the existence of America’s favorite sport and puts Omalu in the crosshairs of football’s most powerful corporation: the NFL.

In September 2002, in a dingy morgue in downtown Pittsburgh, a young forensic neuropathologist named Bennet Omalu picked up a scalpel and made a discovery that would rattle America in ways he never intended. Omalu was new to America, chasing the dream, a deeply spiritual man escaping the wounds of civil war in Nigeria. The body on the slab in front of him belonged to a fifty-year-old named Mike Webster, aka “Iron Mike,” a Hall of Fame center for the Pittsburgh Steelers, one of the greatest ever to play the game. After retiring in 1990, Webster had suffered a dizzyingly steep decline. Toward the end of his life, he was living out of his van, Tasering himself to relieve his chronic pain, and fixing his rotting teeth with Super Glue. How did this happen?, Omalu asked himself. How did a young man like Mike Webster end up like this? The search for answers would change Omalu’s life forever and put him in the crosshairs of one of the most powerful corporations in America: the National Football League. What Omalu discovered in Mike Webster’s brain—proof that Iron Mike’s mental deterioration was no accident but a disease caused by relentless blows to the head that could affect everyone playing the game—was the one truth the NFL would do anything to keep secret.

Taut, gripping, and gorgeously told, Concussion is the stirring true story of one unlikely man’s courageous decision to stand up to a multibillion-dollar colossus bent on silencing him, and to tell the world the truth. 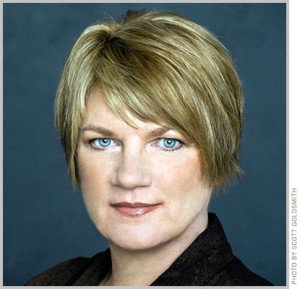 Jeanne Marie Laskas is the author of seven books, including the forthcoming Concussion (Penguin Random House, 2015). Based on her 2009 GQ article “Game Brain,” Concussion is also soon to be a major motion motion picture starring Will Smith.  Most of her longform journalism now appears in GQ, where she is a correspondent writing about everything from concussions to migrant workers to hit-men. Formerly a contributing editor at Esquire, and a weekly columnist (“Significant Others”) at The Washington Post Magazine, she has been writing for national magazines for twenty years, with work appearing in The New York Times Magazine, Smithsonian Magazine, O: The Oprah Magazine, Allure, Ladies Home Journal, and many others. Her work has appeared in numerous anthologies, including Best American Magazine Writing 2008 and Best American Sportswriting 2000, 2002, 2007, 2008, 2011 and 2012. She has won more than a dozen Gold Quill awards for Excellence in Journalism, and her piece on coal mining, “Underworld,” was a finalist for the 2007 National Magazine Awards. Her earliest essays and features are compiled in The Balloon Lady and Other People I Know (Duquesne, 1996). Laskas serves as Director of The Writing Program at the University of Pittsburgh, where she teaches creative writing, and she lives on a horse farm in Pennsylvania with her husband and two children.