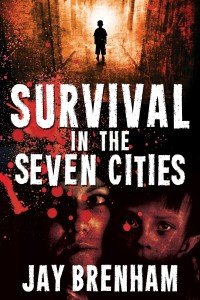 Brenham accomplishes in 40 pages what some authors can’t in 400.

Gloria is like any other woman you’ve ever come across, she’s dated some real jerks.  She finally finds Roger, who is upfront and honest with her.  Kind to her and her children, a real stand up guy.  They have the perfect day planned near the water.  They take in a concert when things start to go wrong.  Roger starts to notice that there is something wrong and does his best to protect his girlfriend and her family in the process.  The man is subdued and Roger is rushed to the hospital.  They all lived happily ever after, right?  Not in this world.  This is just the beginning, or the end depending on how you look at it.

This, like the other novella I read from Jay Brenham was a fast-paced quick hitter.  He genuinely understands character development (especially in a small amount of pages).  In less than 40 pages you fall for and even understand the why of some of his characters.  This short story is no different.

I read this in one passing (it’s really only 40 pages).  There was a run-in with the character from his novella, but blink or read too fast and you would miss it.  I liked that they were similar stories, but totally different points of view.  The typical full novel story arc is here, but just sped up to an insane speed.

If I wasn’t chomping at the bits (see what I did there) to read the full novel before reading these two short story/novellas… I am now.  I really feel like I’m going to be one of those people who will say “I knew him way back when,” because I think that there are big things in Brenham’s future.  Especially if he keeps writing like this.

I was given a copy of this by the author in exchange for an honest review.

The top priorities in Gloria’s life are her three children, followed by her boyfriend Roger, who is more than happy to be the father figure her children desperately need. But this illusion of stability shatters when Roger tries to help an injured man at the boardwalk in Virginia Beach. Instead of being grateful, the man viciously attacks him. When Gloria and her son arrive at the hospital with Roger, they realize this is no isolated incident. The city is quickly becoming overrun with violence fueled by a mysterious infection. Does Gloria have what it takes to stay alive?

This title is stand alone. It can be read before, in the middle of, or after the other books in the series.

I have lived up and down both coasts of the United States and some places in between. I spent half a year living in a former Soviet satellite and I’ve traveled to more countries than I can count on two hands. Some of those travels were for work and others were for pleasure, but I enjoyed them all. I now reside in an undisclosed location in the Pacific Northwest. I wasn’t born here but I got here as fast as I could!

When I’m not writing I like to forage for clams, mussels, oysters and all kinds of bivalves. When I can’t do that, I love crabbing, camping, hiking, and reading about building my own log cabin.