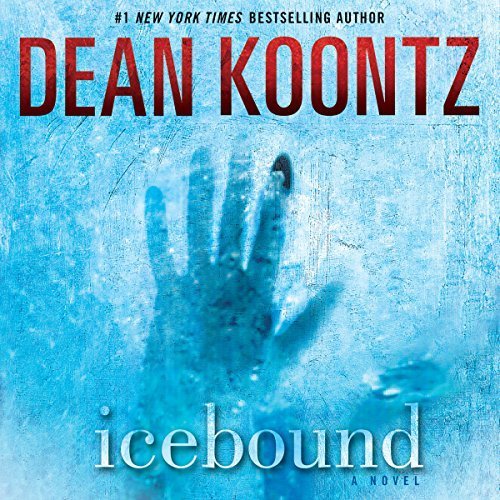 Originally written in 1976 as Prison of Ice under a Pseudonym – Icebound was re-released in 1995.  I’m not sure if anything was changed or updated from the original to the 1995 release – but if nothing was changed – I didn’t realize that Koontz was on par with Crichton for forward-thinking fiction.

The premise of the story is that there is an expedition of scientists who are working on an Arctic icefield – attempting to blow an iceberg off of the field and into the water to help countries who are suffering major droughts and water issues. Just the fact that this was a thought in 1976/1995 baffles my mind.  I guess there are people out there who pay attention to the scientists early and write fiction about it – but this sounds like something out of a 2018 headline, not a 1976 byline of a book. The expedition is lead by husband and wife team of Rita and Harry Carpenter.  Rita suffers from fear of ice and cold – so god only knows why she came on this expedition.  After all the explosives are set – “a shattering tidal wave breaks loose the ice on which they are working” and they are basically stuck on the ice surrounded by their literal ticking time bombs.

One of the members of the expedition is suddenly missing and we later find out that there might be someone out there trying to kill him.  Knowing they are the only ones on the ice they quickly realize that one of them is not who he/she claims.

The book itself was a blast to read.  I wasn’t sure if it was going to be boring with not much going on in the intro – but it was good to get to know the crew and understand why they were doing what they were doing. It was a similar start to The Martian (not exactly the same, but close) once we realize what each person is there for and does. The opening also reminded me a bit of the opening of The Day After Tomorrow – so I wonder if this book influenced either of those.

I haven’t read much Koontz and now I’m doubting myself for this.  I enjoyed almost every second of this audiobook and I’m now going to look for other books that sound up my alley.

I mentioned Rita’s issues earlier in the review – I thought that Koontz did a good job weaving them into the story to explain and describe just how she was feeling.  You really felt for her and felt that tightness in your chest when she started to lose it.

You can tell that this book was originally written during the Cold War because of the Russian (or Anti-Russian depending on your character) sentiment during parts of it.  I won’t give too much away but I thought he wrote about it in a way that still felt realistic in 2018.

I know this has been released on audio before – but Brilliance with Jim Frangione at the helm does a great job on this one.  I thought his narration, speed, and tone added to the suspense that Koontz was trying to build in Icebound.

The arctic night is endless. The fear is numbing. Screams freeze in the throat. Death arrives in shades of white. And cold-blooded murder seems right at home.

Conducting a strange and urgent experiment on the Arctic icefield, a team of scientists has planted sixty powerful explosive charges that will detonate at midnight. Before they can withdraw to the safety of their base camp, a shattering tidal wave breaks loose the ice on which they are working. Now they are hopelessly marooned on an iceberg during a violent winter storm. The bombs beneath them are buried irretrievably deep...and ticking. And they discover that one of them is an assassin with a mission of his own.

When I Was You by Minka Kent (Narrated b