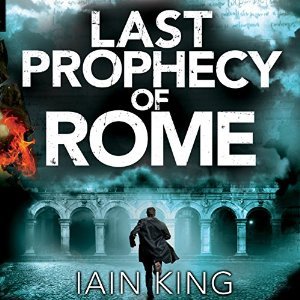 Only one man knows how to stop a terrorist plot

Military historian Myles Munro is caught up in a tornado of activity as people from his past come back to haunt him and ask for his help.  A US Senator is taken hostage and the United States is threatened with terrorist attacks that will take the country back to the stone age. Or should I say the time of the fall of Rome.

The narration for Last Prophecy of Rome is done by Tim Bentinck and he absolutely crushes it.  He’s a British narrator (or at least he narrates in a British accent) which just adds another level to this already interesting story.  Bentinck’s smooth voice made listening to this book easy and enjoyable.

This story had a lot going on in it, but I never felt overwhelmed.  King has a way of writing intricate and interesting plots that are both deep and fun to follow.  The entire time I was reading this I felt like I was with Munro as he tried to stop plot after plot.

As a history nerd also, the tie-in’s to ancient Rome were really different.  I thought that King did a great job tying ancient history into modern times.  This allowed for a lot of fast-paced action and deep thinking to interweave throughout the story.

Overall, I felt riveted to my seat the entire novel.  I loved the Munro character and I’m excited that there is at least one more story in this series with his character in it.  I haven’t looked yet, but if there is an audiobook I really hope that Bentinck does that one too.  He was the perfect voice for Munro.

ROME: Maverick military historian Myles Munro is on holiday with girlfriend and journalist Helen Bridle. He’s convinced a bomb is about to be detonated at the American Embassy.

When a US Senator is taken hostage, Myles is caught in a race against time to stop a terrorist from destroying America in the same way ancient Rome was thousands of years ago.

As Myles hurdles from New York to Iraq, Istanbul and Rome, he’s desperate to save the world’s superpower. But can he stop a terrifying threat from becoming reality before it’s too late? 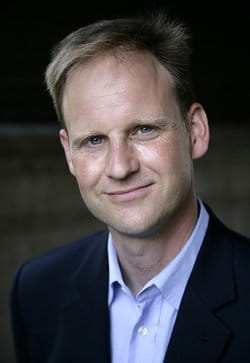 Iain King CBE has lectured to packed university halls across Britain. He speaks about the realities of modern war and peacebuilding, the history of ideas, and philosophy.

Iain has worked in ten conflicts and warzones, including Iraq, South Sudan, and throughout the Balkans. In Afghanistan, where he came under fire several times, he served alongside both the battalion commanders who became UK’s most senior casualties, and was deployed to more frontline bases in the notorious Helmand Province than any other civilian. In 2013, he became one of the youngest people to be made a Commander of the British Empire.

It was while based in Benghazi, coordinating international civilian support during part of the 2011 Libyan war, that Iain met some of the refugees who feature so prominently in his new thriller, ‘Last Prophecy of Rome’. The book begins with terrorists threatening to inflict on America the fate of ancient Rome. Could Western civilisation be destroyed by barbarians a second time…? Read ‘Last Prophecy of Rome’ to find out – an edge-of-your-seat thriller with some unexpected warnings from history. The book will be published on 28th January, and is now available to pre-order.

Since its release in July 2015, ‘Secrets of the Last Nazi’ has topped Amazon kindle charts in the UK, and become the number one new release in its thriller category in the United States. The story traces an extraordinary pursuit across Europe, as Cold War rivals hunt the secrets of former SS Captain Werner Stolz. The debut novel has won effusive reviews both as a compulsive page-turner and for the amazing secret at the heart of the tale. Readers have called it ‘gripping’, ‘spell-binding’, and ‘suspenseful’, and several have said it was the best book they had read for years. Bloggers have called it ‘unputdownable’, ‘fantastic’, and ‘mesmerising’. A well-known American reviewer described it as ‘One of the most original and carefully thought out stories that have yet to appear in print,’ while a Guardian columnist claims it will ‘turn everybody’s ideas upside down and back to front.’

‘How to Make Good Decisions and Be Right All the Time’ is an easy-to-understand introduction to moral philosophy, which also presents a radical new theory on ethics. Used in philosophy courses, it avoids jargon and explains complicated ideas in simple language. The book invites readers to consider some practical dilemmas and long-standing problems in moral philosophy, and offers innovative solutions.

‘Peace at Any Price’ chronicles the international intervention in Kosovo, explaining what worked well, what didn’t and why. The Economist praised it as ‘refreshing, serious and well-considered… excellent,’ while the Journal of Southern Europe described it as ‘one of the most perceptive accounts ever written on the practical difficulties associated with peace building in the aftermath of ethnic conflict.’

Iain also edited and wrote the opening chapter of ‘Making Peace in War’. This compilation of stories from civilians who served in Helmand’s frontline is both moving and compelling. It tells of absurd but very human events during the war, and offers a unique and fascinating perspective on recent events in Afghanistan.