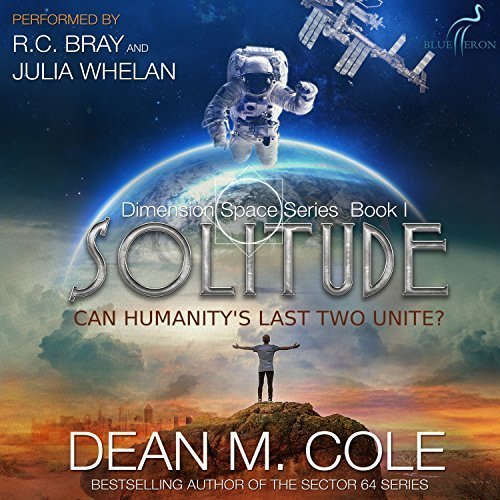 I honestly didn’t even see the comparison to The Martian and I Am Legend (I try to not read the synopsis of a book that I’m pretty sure I’m going to love) — but that is a great combination of exactly what this story was.  I hate copying exactly what is written in the description on Amazon, but when it’s right, it’s right.

Dean M. Cole can write! Every time I thought “okay, this is it, he’s got it!” or “she’s got it!” he continued to throw everything at the two main characters.  It got to the point where I was pretty sure that both of them were going to give up numerous times.

A story about what could potentially be the last two people in the world and one of them is stuck on the International Space Station is already a story that I would read in a heartbeat.  Then you throw in that R.C. Bray and Julia Whelan are going to dual narrate it? Okay, now I’m salivating. Oh, and it’s funny and heartbreaking at the same time like The Martian? Jesus, okay, I bought the book, let’s go!

We’re almost at the half-way point of the year and I believe that I may have found my audiobook of the year already.  Ironically it follows a similar type story as last years — but this one has even fewer people in it.

There was a part of the book where I was a little worried around R.C. Bray narrating it — not because of him or his narration at all (he’s seriously one of the best in the world and is the sole reason you’re reading this blog today).  It was because there was a character named Mark.  And I couldn’t get “Whatney” out of my head every time he would say his name.  I was seriously concerned, but my concern didn’t last as long as I’d expected.  There was even a line that made me pause the audiobook:  “…duck tape… Oh right, you’re Mark Whatney and this is The Martian”.

I honestly don’t even have to go into Bray and Whelan’s narration of this because it was spot on and perfect.  One of the best audiobooks I’ve ever listened to.  Definitely up there with The Martian as Bray’s best performance.

Overall, Solitude is easily one of the best books I’ve read in 2017 and will be in my memory for years to come.  I will gladly be recommending this to all of my friends and family — especially those who loved The Martian (or enjoyed I Am Legend).  Dean M. Cole has shot himself up to the top of my ‘to-read’ list and I will be eagerly awaiting the next book in this series.

I Am Legend meets Gravity and The Martian when Earth's last man discovers that the last woman is stranded alone aboard the International Space Station. If you like action-packed, page-turning novels, you'll love the electrifying action in this apocalyptic thriller.

Separated by the gulf of space, the last man and woman of the human race struggle against astronomical odds to survive and unite.

Army Aviator Vaughn Singleton is a highly intelligent, lazy man. After a last-ditch effort to reignite his failing military career ends horribly, Vaughn becomes the only human left on Earth.

Stranded alone on the International Space Station, Commander Angela Brown watches an odd wave of light sweep across the planet. Over the next weeks and then months, Angela struggles to contact someone on the surface, but as she fights to survive aboard a deteriorating space station, the commander glimpses the dark underpinnings of humanity's demise.

After months alone, Vaughn discovers there is another. Racing against time, he must cross a land ravaged by the consequences of humankind's sudden departure.

Can Vaughn find a path to space and back? Can Angela—the only person with clues to the mystery behind humanity's disappearance—survive until he does?

This Would Be Paradise by N.D. Iverson (

Audiobook: Into The Outside by Lynda Eng