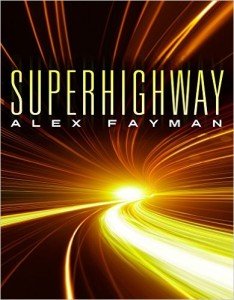 Sit back and enjoy the ride

Alex is just like all the other kids at his orphanage, he’s older and he’s about to “time out” of the system.  He had a taste of computers when an adoptive family had a computer in an “off-limits” room, and he felt like he’d known the internet his whole life (even though he was just using it).  Then one day, he grabs the cord behind the new computers in his orphanage and bam — he’s travelling through the “portals” of the internet.

This was a page-turner for me.  Mostly because I wanted to know what Alex’s next move was going to be.  Alex started off a shy and quiet kid and by the end he’d made a total transformation.  This is a technothriller mixed with a coming of age story.  Alex, who is also a hit with the ladies has numerous different girls who attempt to get his attention, and following those stories as they progressed was fun and engaging (without being creepy or weird).

This was one of those “fun” books that I don’t read as much as I would like.  The premise was unique and reminded me of some AI books I’ve read, but was different from the main characters point of view.  There are some serious and some graphic scenes in it.  I would warn some that there are graphic scenes involving torture and murder — just be warned.  It was a surprise to me, I knew what Alex was doing, but I didn’t expect that turn to happe

I don’t want to give too much away, but this book is definitely one of those that builds.  The beginning is just background, then you find out Alex’s “superpower” and what he wants to do with it — but the actual gameplan and execution were a blast to read.

A “superhigway” of a read.  This was one of those books I’m glad I read.