A thriller full of twists and turns

Secondhand Smoke tells the story of a private investigator Jake Brand and a new case that he is introduced to.  It feels like it’s going to be a quick open-shut case, but after he does some digging it ends up being way more than he expected.  He opened pandora’s box, so to say. And now numerous different groups are trying to tie him to different things and figure out why he’s hanging around in all the wrong places.

At the beginning of Secondhand Smoke, I wasn’t sure what I was getting into.  I knew what the synopsis said and I understood the story — but I didn’t read the first book in the series so I wasn’t familiar with Jake Brand, PI or any of his quirks (his angel and devil for example).  But, it didn’t take long for me to figure out who he was and what made him tick.  M. Louis did a great job making new readers feel at ease with Brand.

The story itself started off a little unsure of itself, I think this was done on purpose.  Secondhand Smoke gave some back story and then showed the case that Brand was going to be working on.  But once he had the case — things started to fall into place very quickly (for the story, but definitely not for Brand).  Every character introduced after that made the story feel real and interesting.

Louis did a great job writing a witty and funny noir-like private detective without making him feel old school or unimportant.  The few jokes they made at him involved technology, but I liked the way that Brand attacked the situations (both old and new).

Overall, I really enjoyed this story and I ended up listening to it almost all day today (Sunday) so that I could finish it. I couldn’t put it down.  As soon as I finished it, I looked at the first Brand book and it’s now on my wishlist.

The narration for this really made it enjoyable.  McCarthy does a perfect job voicing Brand, making him sound competent and a little half-witted.  The dramatic and the funny scenes weren’t difficult for McCarthy.  He breezes the reader through this great book with ease.

Running for his life wasn’t exactly what Portland PI, Jake Brand, had in mind when he accepted his latest client—but that’s exactly what he and Sarah, his best friend and assistant, find themselves doing in this heart-pounding sequel to Angel’s Devil.

Deception, fueled by money, begins when a beautiful woman throws down serious cash for Jake to find her missing boyfriend. Violence follows when Jake and Sarah discover the couple is connected to a hacker who colors outside the lines, a beautiful pharmaceutical sales rep, a slimy cop who can’t take a punch, and a federal agent bent on hiding the truth. They all know too much—and soon enough, so do Jake and Sarah.

In the midst of the danger, Jake finds time to annoy his yoga instructor, and fall for the woman with more secrets than answers. 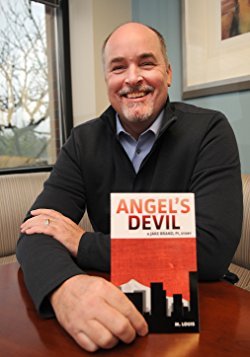 M. Louis is a native Oregonian, and is currently a resident of Lake Oswego, a suburb of Portland, Oregon. He’s married, has three children and one grand-dog. For many years, M. has owned a successful public accounting firm.

His adventures into writing began when a friend suggested he start tweeting for his clients. Convinced he could gain more followers by using fiction, he began to tweet the original concept for what would become his first crime-thriller series. Gripped and captivated by the plot within days, he decided to delve deeper and began developing in-depth character profiles, fleshed out a captivating plot, and came up with intriguing timelines. What had started out as a few ideas for tweets, turned into a full-fledged, action-packed crime-thriller series which takes place on the rain-soaked streets of Portland.